in Soul Alignment by Ronda Renée

For weeks, I had been waking up in the middle of the night to a song playing in my head. Sometimes, it was the same song several nights in a row. Sometimes, it was a different song each night. In every instance it was a repeated lyric over and over.

At first, I thought that it was due to too much “noise” in my head and figured that it would resolve itself if I upped my meditation and presence practices. Still  it persisted.

Then I thought maybe I’d been listening to too much music with words in it. You know how you can get a song stuck in your head sometimes, right? So I dialed back on my iTunes consumption. Still it persisted.

Nothing seemed to make it stop.

Finally, I began to pay closer attention to the song itself. After all, if it was happening because of some sort of psychic residue from my daily life surely it would be a song I had recently heard, right?

This detail made the phenomenon even more confusing – and intriguing!

The day I began to put the pieces together was thanks to a song by Sarina Rosa called “I’m Only Human.” The lyric that kept repeating itself was “I crash and I break down.” It hit me square in the eyes.

I had been pushing myself way too hard for months. I love my work, adore my clients and I’m famous for over-delivering. And it was starting to take its toll. I was headed for burnout – a crash.

I hadn’t been to yoga in weeks because I couldn’t match my schedule with the studio’s. I had gotten in the habit of eating on the fly exacerbated by the fact that I don’t have a full kitchen in my part-time place in California.

It was time to slow down and take care of myself.

Thankfully they haven’t all been warnings.

More recently, I woke to Stevie’s Wonder’s “Isn’t she lovely, made from love.” Definitely not a song I had heard recently! And it made perfect sense because the day before I had been literally bubbling over with joy and gratitude for the blessings in my life and the people that surround me. It felt like I was completely embodying the essence of love.

It so happened that this last episode occurred just two days before my dad’s birthday. At that point, I realized that this had happened to me before…..

During the time that my dad was in the ICU on life support, Jason Mraz’s “Living in the Moment” was a constant companion. “Peace in my heart; peace in my soul; wherever I’m goin’; I’m already home”

As my brother and I were soon faced with one of the toughest decisions one can ever make, it felt like my dad was letting me know that he was going to be okay.

Sometime after my dad’s transition there was another episode. A lyric that was incessantly repeating in my head at all times of the day and night. Over and over and over……..

It was making me crazy. I finally found it on YouTube and learned that it was the band Shine Down which I had no memory of ever hearing of. The first words out of the singer’s mouth were “my eyes are open wide” and I knew this was another message from my dad.

After nearly two weeks of being haunted by this song, the simple acknowledgement of “I hear you Dad.”

There are so many ways that we can access and receive messages and intuition that simply look like ordinary parts of our everyday lives – like a song. But anything and everything can be divine guidance.

So what keeps us from receiving these messages for what they are?

We ALL have the ability to tap into the power of intuition when we remove the most common obstacles that block us from receiving the messages that are always being sent. 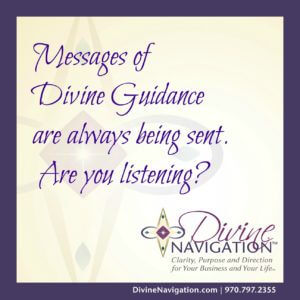 My friend and colleague Natalie Rose recently interviewed me and thirty other top experts for this free online video interview series, “Elite Life Mastery Secrets: Unleash Your Intuition, Reclaim Your Power and Take Charge of Your Life.”

During our conversation, I shared “The Four Most Common Blocks to Accessing your Intuition and How to Remove Them Instantly.”

Watch the entire video of our conversation today and discover practical tips and tricks, new ways of thinking, simple practices, and powerfully inspiring stories to jumpstart your journey to becoming all you are meant to be.

I’d love to hear about the messages you have received!